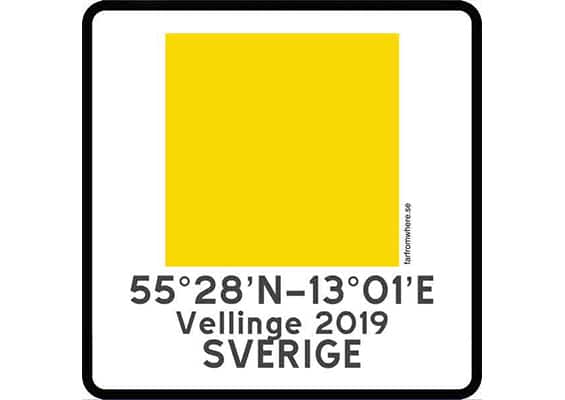 Exhibition open August 31–September 8 2019.
Open hours: Mon–Fri 3–6 PM, Sat–Sun 12–4 PMKonstkiosk is a project in the borderlands between art and architecture.
When our cities are densified, we must protect the public space.

The project is initiated and organised by Peter Dacke and Christel Lundberg.
The project group also includes Juan Carlos Peirone and Nicholas Hartman.
The project invites Swedish and international artists, architects and theorists.

Konstkiosk # 3:
We show works by architect and artist Juan Carlos Peirone as the main exhibitor with documentation of his international sculpture project Far From Where? a unique land-art work that connects places and people throughout the globe with the help of an archetype of an oven. Along Järnvägsgatan in Vellinge, Juan Carlos Peirone places signs with his sculptures together with coordinates that mark their location in different places in the world.

Book release by Konstkiosk #3:
In this edition, Konstkiosk presents texts by Pär Gustafsson, landscape architect, Professor emeritus who tells in an email conversation about his grandmother Elna’s work at the hospital in Höllviken, where a special railway led patients from the hospital down to the beach. Emma Nilsson, architect and researcher working at Lund School of Architecture and the Department of Architecture and Built Environment at Lund University writes about an art kiosk located at Clay Station, London, which is a result of a collaboration between the architectural collective Assemble and the artist Matthew Raw. It is interesting to gain an insight into how historical aspects of an area can be implemented in art and architectural contexts. Kaj Persson, editor of the Facebook page Gamla Vellinge, with his contemporary report on Vellinge, provides a broader perspective on a changing place. He himself grew up in Vellinge and with a strong and genuine interest in his surroundings but also with a look at wholes and contexts he gives us an invaluable invitation to the underlying social structures of the town. Michael Holst, head of locomotive drivers, SJ AB, Malmö gives a picture of the railway network in Skåne as a precursor to the infrastructural communication that the internet today constitutes. As an employee manager at SJ AB, he gives an insight into how a public utility company has developed and changed over time. In this issue, Juan Carlos Peirone also presents the art project Far From Where?.

During the exhibition, Konstkiosk presents historical photographs from the railway area in Vellinge installed on lampposts at Lilla torg in Vellinge where the former railway station was located. At the bike path, which is the former railway path, historical signs showing geographical links to the outside world in the direction of Södervärns Station, Falsterbo station and Trelleborg station.

We would like to thank Vellingebostäder and Vellinge Municipality for the use of land during the exhibition period.